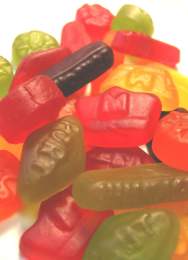 Wine Gums are a soft, gummy candy with a consistency similar to, but much chewier than, gummy bears. While Wine Gums are widely available in the UK and in most British colonies or former colonies, they are often difficult to find in other countries like the United States. Swedish Fish candies are considered to be a wine gum type candy, and are usually available in the US.

Wine Gums (sometimes spelled winegums) generally come in six colors: Red, Orange, Yellow, Green, White, and Black. They are manufactured in a number of basic shapes including a circle, a diamond, a short oval, a longer rounded rectangle, a kidney shape, and a crown (Maynards brand only). Some brands are also imprinted with the names of wines such as Port, Champagne, Claret, Sherry, Brandy, Burgundy, Gin, Cider, Hock, Rum, and Cognac. Some companies claim that the first Wine Gums were indeed made with wine, while others claim that they never were.


No Wine Gums currently made contain any alcohol, however; they're an all-ages treat. But what about their flavors? Are their flavours supposed to be reminiscent of wines, or of fruit? That's a topic of endless debate among Wine Gum lovers. If Wine Gums were once flavored with wine, they now seem to be primarily fruit-flavored, though of course since wines are produced with fruit, one could argue that they still are wine-based.

If you wish to add your voice to this debate, or tell us what flavor you think a particular Wine Gum really has, contact us at

The Allan Candy Company has stated that their Wine Gum flavours are as follows: Red is raspberry, orange is tangerine, yellow is lemon, green is lime, whitish is grapefruit, and black is black currant. Other companies' flavors may differ. 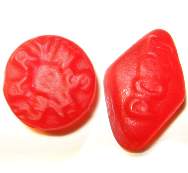 The red Wine Gum's flavour is red. Okay, so that's not really a flavour. Presumably, its flavour is that of a red colored-fruit: raspberry, strawberry, cherry, or red currant. Or perhaps it's supposed to taste like a red wine.

Raspberry seems to be what most believe the red Wine Gums to be. 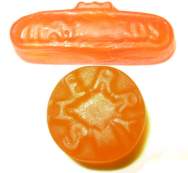 This one's easy. The orange Wine Gum has the flavor of orange. Or could it possibly be tangerine? 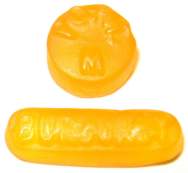 This one, too, is relatively simple. The yellow Wine Gum has a lemon flavor. 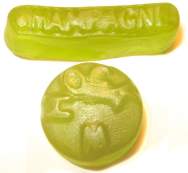 The green Wine Gum is lime flavoured. At least that's the opinion of most Wombies. 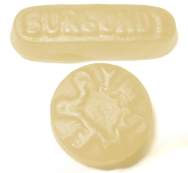 The whitish Wine Gum is the one that gives people (and Wombies) the most to argue about. In fact no one can even agree as to its color. It could be described as white, whitish, pale yellow, buff, cream, or just about anything else. Sort of like a hairy-nosed wombat. To complicate matters further, not all brands include this type of Wine Gum. And its flavor? Who knows! It seems to vary among the various brands of Wine Gums, which only deepens the mystery. Does it have a real fruit flavor at all? Is it wine-flavored? Or is it just some artificial (but delicious) flavor concocted in some food lab? Its flavor could be described as that of a tart white grape (as in white wine or champagne), or perhaps a grapefruit, pineapple, or even pear. Or is it vanilla? On thing it is not, however, is milk-flavored.

Although most seem to agree that the white Wine Gum is grapefruit flavored, some feel it is actually pineapple. 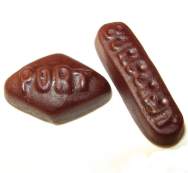 Another mystery. The black Wine Gum's flavour also seems to vary depending on the manufacturer. Many people would say the black Wine Gum has a licorice flavour (one person thinks it is "black licorice with a bit of grape in it"), but others would say it has a strong berry flavour, perhaps black currant or blackberry or even grape. Often the black Wine Gum is in fact more of a dark purple than black. Flavours may also vary from different manufacturers.

The consensus among our visitors is that the black Wine Gum is, in fact, black currant flavoured.

When Wine Gums are too fresh, they do not possess the right texture and the plastic packaging they come in does not allow them age properly. The following tip was submitted by G. Fraser:

"There is happily a simple solution to this problem. Remove the plastic packaging, put the winegums in storage for 3 weeks or so and shake them every couple of days. I store mine in a metal cake tin but anything non-airtight would do."

See the Wine Gum Page for the Wombies' take on Wine Gums.

Copyright © 1999 Peter Marinacci. Edited by RLB Hartmann. All Rights Reserved. Please don't copy or reproduce the material on these pages without prior permission.